Build work on Nottingham College’s new City Hub campus, in the heart of the city centre, is now complete!

Builders and main contractors Wates, formally handed over the building to the College last week and work now begins to relocate more than 2000 students and 200 staff into the building.

The handover marks over two years of build works, and many more on planning, to re-purpose the former brownfield site next to the Broadmarsh.

The new college building sits exquisitely into the tight former Narrowmarsh site and complements the surrounding buildings and views of the Lace Market escarpment.

The new £58.5m state-of-the-art City Hub will provide fantastic new learning and community facilities and future employment opportunities to thousands. With the new building fully functional and operational by the New Year, the College will say goodbye to its Clarendon and Maid Marian Way campuses and say hello to its new City Hub, along with a newly renovated Adams Building.

Central to its estates vision the completion of the City Hub now ensures the College occupies modern, fit-for-purpose and expansive campuses at key locations across the City, including its 2015 redeveloped Basford Hall, its iconic Highfields campus within the Nottingham Science Park and its renowned High Pavement sixth form campus, on the edge of the city centre.

Current college students from Science, Early Years, Catering and Hospitality, Business, IT and Computing, Media, Performing Arts, Travel and Tourism and more will now begin the process of moving which will be managed slowly and in stages starting during this half term and stretching through until Christmas.

You can see a selection of exterior and interior shots of the Nottingham College City Hub on our gallery below. 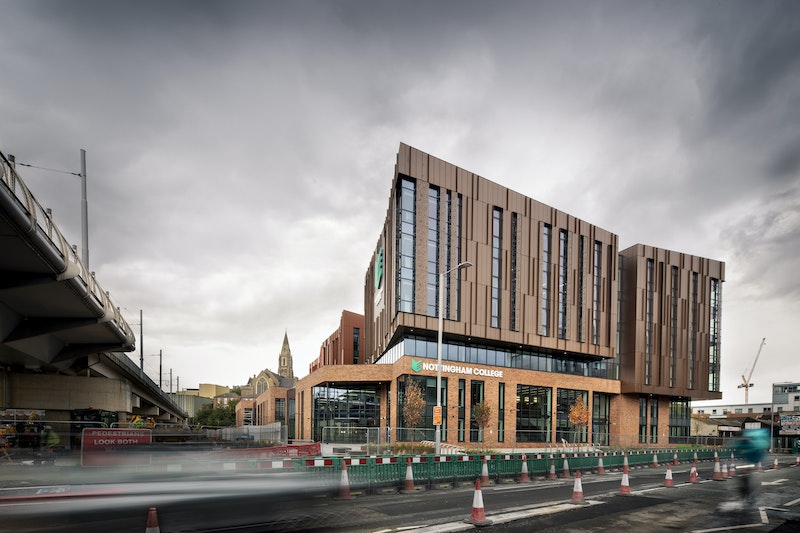 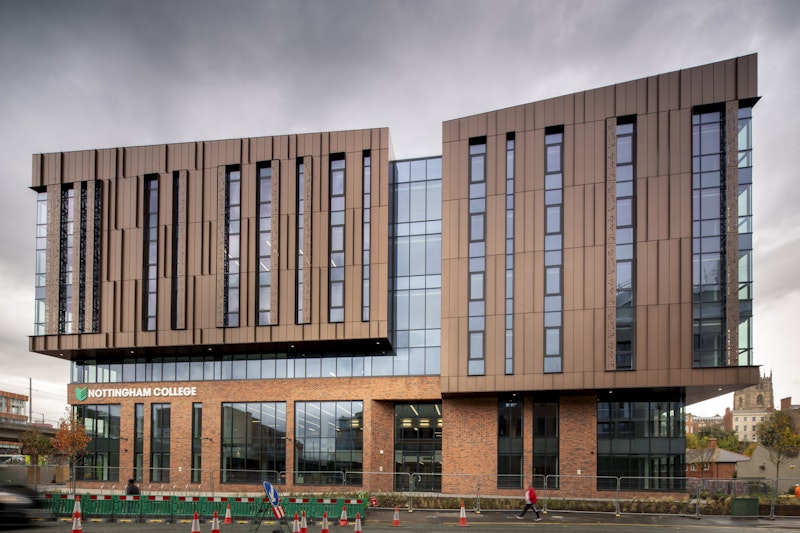 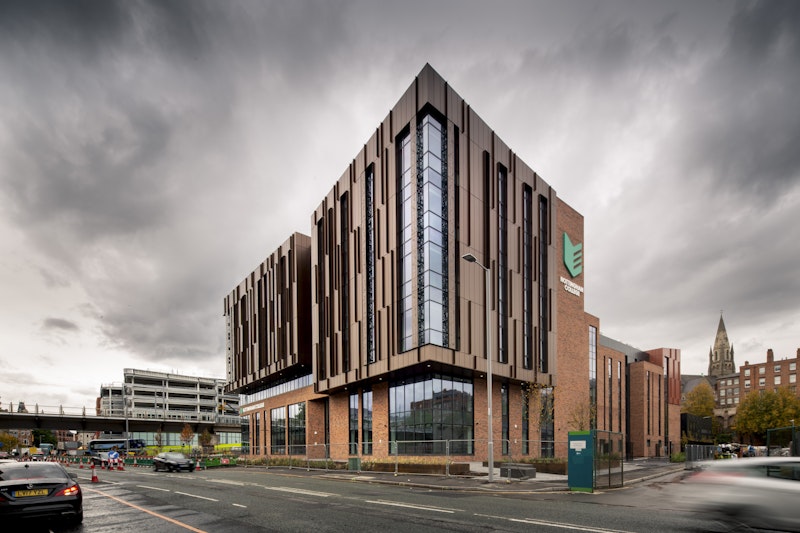 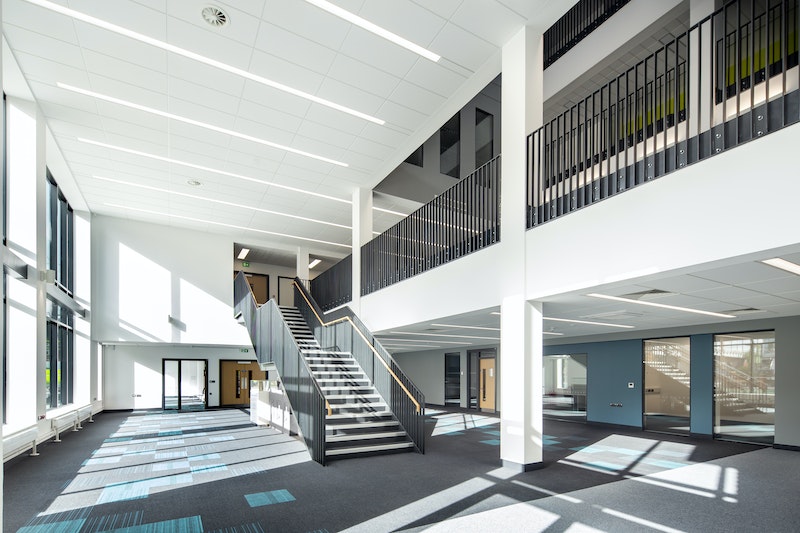 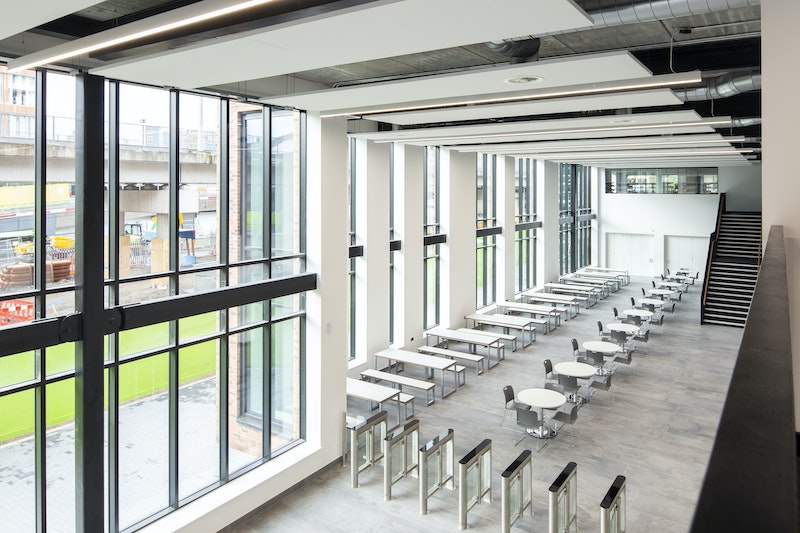 Interior of the entrance floor taken from above 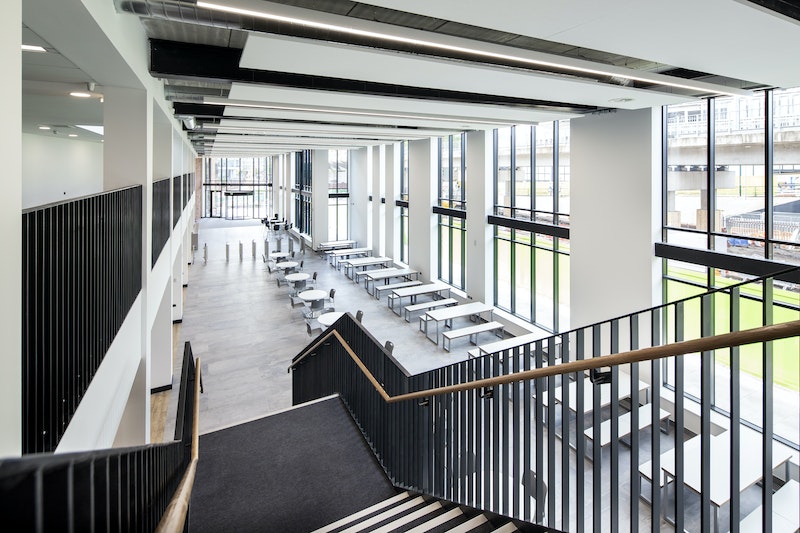 Interior of the entrance taken from a staircase from opposite end of the building, showing canteen and entrance doors 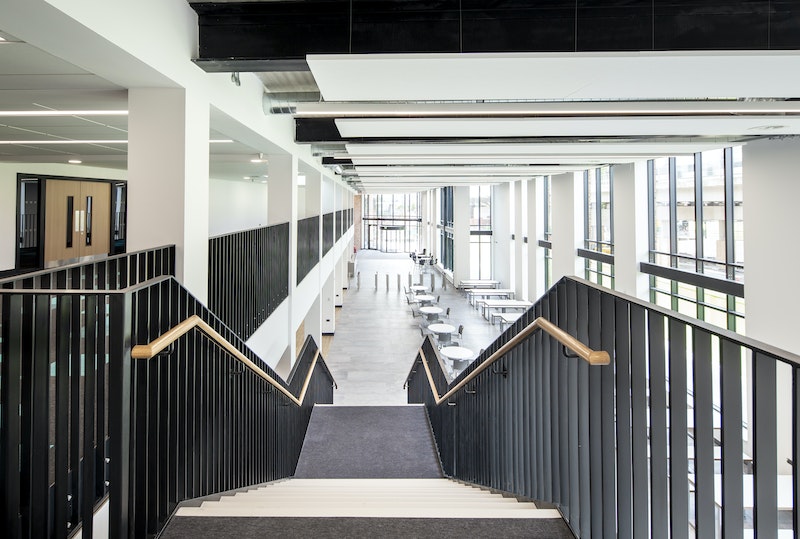 Interior at the top of a staircase showing the first floor 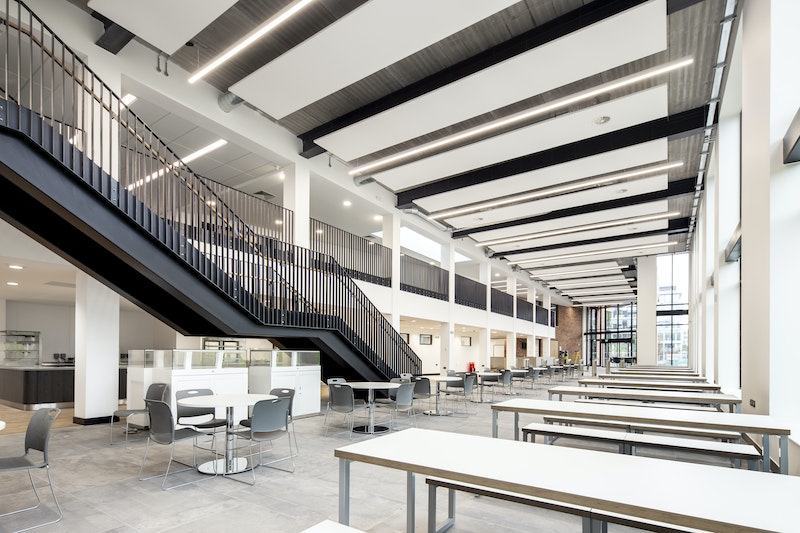 Canteen area taken from one of the seating areas

I am delighted to take possession of the City Hub on behalf of Nottingham College and I would like to thank all of those who have worked so hard to make this day happen in such difficult times.

The building is spectacular both inside and out and I know that staff and students can’t wait to start using it. This is a major investment in education and skills in Nottingham by the College, the Local Enterprise Partnership and the City Council. These state-of-the-art teaching facilities will inspire generations of students and equip them with the skills and knowledge they need to meet the needs of local, national and international employers helping them and their City to thrive.

The full economic impact of the coronavirus is still to be felt. But education and this college will be vital to rebuilding the economy and people’s livelihoods by providing excellence in education and a route to exceptional opportunities for the City and its people

Wates won national praise for the way in which they implemented Covid-secure measures on the site which enabled them to keep the development open and operatives working, minimising delays. They received additional praise for how they involved young people in the development and for engaging local suppliers and businesses. John Carlin is the regional Midlands MD for Wates and said:

This has been such a memorable project for us in large part due to the positive impact it’s left on the city’s stars of tomorrow. We’ve been proud to provide permanent jobs to four school leavers, including two graduates from Nottingham College, created 29 apprenticeships and carried out 65 educational visits, as well as delivering 18 lectures on the Built Environment at the College itself.

Thanks to the hard work of Project Director Adam Cannon and his team we’re thrilled with the end result and can’t want to see students experience the new campus in the New Year.

The £58.5m City Hub development is a true partnership effort, receiving a £30m grant from the D2N2 Local Enterprise Partnership and additional funding support from the City Council.

Sajeeda Rose, the Chief Executive of the D2N2 LEP said:

We are delighted to see that the Nottingham City Hub is one step closer to welcoming students through its doors. D2N2 is proud to have invested £30million of Local Growth Funding into the construction of this landmark building.

The Nottingham City Hub will change the face of skills provision in our area, playing a key part in the pathway towards rebuilding and growing our economy by creating career paths and providing our businesses with the talent they need to thrive and grow.

The City Council has been fundamental in their support of the project. Cllr David Mellen, Leader of Nottingham City Council concludes:

It was a little over a year ago I visited the City Hub for its topping out ceremony, and given the constraints contractors have worked under during the Covid pandemic, to deliver it in good time is an impressive achievement.

We are very pleased to see the new City Hub handed over, one of the first buildings in the Southside area to begin its transformation from brownfield site to a fantastic new venue for Nottingham’s students. I’m particularly pleased that it is sympathetic to the surrounding area while adding a modern façade to the cityscape.

I would like to thank Wates Construction for being so considerate to our residents on Cliff Road and the Lace Market in their construction of the City Hub and our partners at Nottingham College. Once the college is able to welcome new students safely, I have no doubt they will enjoy learning in such an excellent facility.

The project followed the innovative Scape framework which means that the City Hub project can enjoy a lasting legacy within the City as well as act as a beacon of excellence for other educational investment projects.

Further Education has a huge role to play in the future economic resilience of the UK, not just in terms of developing skills where we need them but also in sustained and vital infrastructure investment.

Further Education is a key focus for government spending this year, and many colleges will be able to learn from the outstanding example set by Nottingham College City Hub. With the right partners involved, colleges can seize the opportunity to rapidly deliver state-of-the-art learning environments for the future.

The building totals some six storeys and offers more than 15,000 sqm of internal space.

Within the building we have a theatre, a student refectory, a learning resource centre, a commercially operating training restaurant, an employer hub offering tenancy to local businesses, new kitchens, new science labs, new acting and dance studios, fantastic classrooms, breakout and communal space and so much more.

The City Hub forms part of a much larger regeneration scheme, led by the Council and affecting the whole southside of the City. This £2bn regeneration programme includes the Castle, the Broadmarsh Centre and the Island Site which goes further out beyond Canal Street and beyond London Road.

The City Hub was designed by renowned architects Bond Bryan.

Wates Construction, the largest arm of Wates Group, is a UK-wide contractor working to shape a better built environment and lasting social legacy.

Their expertise on complex projects within the public sector, education, residential, commercial and Blue Light sectors, means that they efficiently deliver high performance buildings that enhance the places and communities around them.

Wates Construction are proud to offer a diverse and inclusive workplace, which has the development, safety and wellbeing of their people at the fore.